Its winter, and with that comes the cold and flu season. This can lead to lower volume of attendance at some of the events we feature here on our calendar.

However, towards late January, the nation has had a new kind of virus in our midst — COVID19. As February turned to March, we began hearing of a number of different events starting to cancel or postpone. Even the furry community has been reacting to these concerns, and by this week, event cancellations have been coming in from fur meet organizers. Sad to say, but social distancing is one of the ways to slow down the spread of COVID-19.

Stego and I had been silently making plans for FurBQ, and we did manage to make a reservation sometime in late fall. While this usually leads to a subsequent update here on this blog … we are gonna hang tight with those announcements. It is possible that more events may also cancel, and we will continue to update this website, our Meetup calendar, and of course blip it out to our social media channels.

Already, some of the events that are affected by these health concerns seem slated to postpone until October. This could mean more furry (and related) events going on in our state around the time proceeding our scheduled reservation. We are looking at July 1st as a date to make the final call on whether FurBQ can happen this year.

All of the cancellations of big events, fan conventions and parties does affect many event staff and vendors, who may lose money or employment because of these closures. For anyone on social media, you may have seen hashtags like #ECCOnline and #homecon, and entire threads dedicated to allow affected artists to plug their store or online commission forms.

This plays into an idea that I have been rolling around in my head, just related to helping promote furry artists and fursuit makers from Southern California. In short, the idea would be to provide a listing of local artists, with links to their respective shops, art sites, and other places where you can view artwork and get in touch with them. However, I feel like this is something Id like to build up with other website designers and WordPress peeps. Id like to have more of SoCalFurs.com’s improvements shaped by people outside of myself, getting more of a mix for influence. With me starting my new 40 hour a week job, I definitely could use the help.

So, if you are down with this idea please get in touch. If need be, maybe we can set up an online space for round table discussions, and get this idea off the ground ….. alongside fixing this website’s outdated theme 😉 For all the issues that I have observed and experienced**, I continually see the kind of community fostered here in Southern California. (Some of us) may be socially distancing ourselves while we deal with some Real Life Serious Stuff, but I know our community will be here and come back stronger than ever.

** I admit, my relation to community (in general, as a concept…not just furry) has been a bit strained this last year or so due to some needed Self-Care and improvement. On a personal level, I have had to get past some trust issues caused by things observed in my community, my experience as convention staff, and a bit from from being burned by previous SoCal Furs staff (and staff-adjacent) people.

Well! That sure was fun! Over a week later, we can now say we have recovered from the SoCal Furs End of Summer FurBQ. In fact, we have been using the week to reflect and take it all in….

As usual, FurBQ began at 3:30 when our alarm sounded, we hopped out of bed, and got into our pre-packed car. Making the journey from San Bernardino, we ran into a bit of off-peak construction before making our way to the 91. In addition to traffic, we looked to the skies (and weather reports), and found that any lingering concerns about rain was eased. We arrived at the park just minutes before it opened, watching the sky light up as the sun rose to meet us.

While Stego went to add signs along the park road, Kat and friend Howlie parked at the site and began uploading. Within a short time, others showed up. Help was offered, which we took, and soon we formed areas for food as different things were brought. Signs got placed along the perimeter. One of the early arrivals had a whole setup for offering a morning coffee hour, with extra tables and carafes greeting a surprised Kat.

By about 10:45, there was a steady stream of furs trickling in. Our group had started to use parking in lots a site or two over so we needed help in bringing people’s food up while the other party parked at a lot farther away. Throughout the day, the crowd grew and by lunch hour, it seemed that we had a more dramatic increase of people coming. We even had some entertainment by the father of one of our attendees, as he had brought his guitar.

A group of furs from San Diego came up and set up a changing tent, encouraging us to grab some Gatorade and water to place in the tent so people could hydrate when they wanted to have a break from fursuiting. While our food supply was constantly added to by new arrivals, it was around 4:30 when we started to actually see a dent in key items like water, soda and Gatorade. Just like ice, these are the items that we can never have too much of. 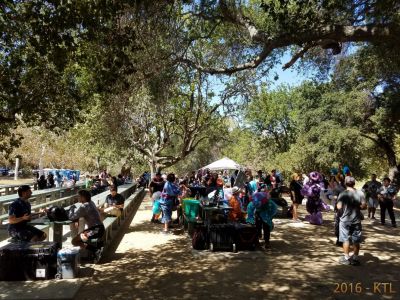 Event in full swing, with nice weather and some shade under all these trees.

From those brand new to fandom to the people who have attended over many years, we can say this is an event where you can be surrounded by furries at any given time. At the same time, the nearby areas (not part of Group Area 3) gave people enough space if they felt overwhelmed from the crowd. Even some of our long time friends (that we had not seen in forever) ended up stopping by. We counted about 190-215 furs attending at the peak time of our event. Stego and Kat considered that the money for the reservation was well spent because, while there were a lot of us, it was easy for our crowd to move around the space and not feel cramped.

Even the Rangers would make a point to stop by our area, sometimes to check on us and other times to take in the colorful costumes. Sometime in the afternoon, our Ranger contact came by and asked if we could help get pictures of the fursuiters with some of the other park staff. Since the other staff could not leave the gate area of the park, the Ranger had an empty truck. Yalta Wolf took the passenger seat and then 4 more furs were placed in the back. We would love to see how the pictures turned out.

Once 6:30 came, it was time to close up shop. We started cooling the grill down and others helped consolidate food and other items into piles so we could sort further and get things put away. When you have furries frolicking in costume, its expected that we expand out of our space a bit so we even tackled areas outside of the Group Area #3 boundaries. I would say we had a decent handful of helpers and, after 2 hours, we could safely say that we got the picnic grounds back to the way they were (but also hopefully even cleaner and trash-free).

First off, we would like to thank our donors that helped with the initial reservation costs. Those donors are as follows: DoodlestheGreat, YashaTaur, Ultimus (SixLeafClover), Sandoz The Megatherium and Joran Zero

Thanks to the countless furs that contributed food or supplies which kept the food flowing. We are also grateful for people who brought and shared items that gave people fun activities as the day went on.

From our first year in this new spot, Stego and I have an idea of things we can do to improve the event for both the guests and for FurBQ staff. We had many people helping with the event as it went on but we can see areas where we might want to get more bodies to help. The place had emptied out by 7:00, leaving around 8-15 of us to clean up the park. With the increase in park space, we had more ground to cover.

We also noticed that the free grill areas did not get used. While we didn’t expect they would get much use (due to this being our first time in this reserved area), next year’s event will likely stress the free grilling areas a lot more so that furries who like a bit more independence know that these areas are available.

With every helpful group of people, our event seems to get better and better. So, if you get a random idea or suggestion for our event feel free to contact us, as we tend to get our planning started early enough before the event.

Yup. Over the years, we find that more than a few items end up left on the grounds. Here is what  remains for SoCal FurBQ 2016 Lost and Found inventory (Updated 2-22-2017)

Feel free to go directly to our Lost and Found gallery to view these items.

There are no upcoming events.