What a crazy week and a half it has been! Things are (still) slowly getting packed away, but the memories and fun linger from FurBQ 2019.

We had gone to bed, feeling we are as ready as we could be for this year’s prep.  Beep beep went the alarm, and we rolled out of bed. With half of the stuff pre-packed into the car, we only had a few trips to make, and packed the coolers.  We headed down the mountain around 4:45am, looking ahead to the road. Nearing Orange County, we kept our eyes out on our Weather app and Kat looked at the sky for the clouds. We arrived just as the park was opening, with barely a wait.  Kat had a very brisk walk in almost darkness, as she put the signs up along the way down the park’s road.

As cold as the morning was, many of our usual attendees were there first thing. People were milling around the lot, and there was a bit of movement as people began to bring up the food or items they were contributing. Ahki/Parawolf showed up with a full rolling cart of goodies. From the unloading going on, I could tell that our breakfast time was going to get on a whole new level.

We had a full kitchen stock worth of breakfast items — from bacon (thanks to Blackie’s dad for bringing some cooked bacon.  Parawolf must have gone through about a dozen eggs, and still had a good deal remaining.

Admittedly, if the rain wasn’t something that we were looking to the skies for….we were also having to pay attention to one of the trees on the farther side of the picnic grounds. As luck would have it,  we had some familiar ‘friends’ that we would be hosting alongside our attendees — BEES! Yup, not just a visible presence of bees, but a whole tree full of them. While Kat was walking around filling holes and adding signs, Stego made contact with park staff who were able to send someone over to put in a report so that the bee nest could be dealt with properly at a later date.  The ranger also placed some helpful signs that (hopefully) other furs would read. From general conversation, there was some constructive ideas for next year. Someone (I wish we could remember thier name) had even brought us a plastic bottle style trap, which would be a humane way to deal with the problem. We would like to put a call out to any suggestions of some humane bee traps that we can purchase in bulk.

Leo Tsubasa had also arrived and was eager to set up. Unfortunately, due to some changes made in his grilling area, we found that it was better to coalesce his grilling stations with the ones that Stego likes to use. Parawolf remained on that other side, with his coffee station set up for all the furs that would come that morning. If you can believe it, 6 gallons of coffee was consumed (and 100 hot cups used) by the time 6:30am rolled around, and Parawolf began running out.  Outside of the coffee, many loved the other hot drinks that Parawolf had to offer. Even I hoped to snag a cup of hot cocoa, but the morning kept me quite busy.

The pickup truck belonging to Chance the Dragon rolled up early, despite how far he (and the other San Diego furries) must drive to reach Irvine. I would say that the ground was probably still wet, but with the impending weather reports of previous days, these furries were prepared. Moving with efficiency, this series of Easy-Up tents were ready to receive furries within the hour of their arrival.

As the day went on, a few of us would occasionally look to the sky. The clouds wanted to hang around, and we had an idea of how the “chance of precipitation” would change through the day. A few furs had set up two Easy-Ups with no walls, and were serving drinks (sodas, non-alcoholic beverages, etc..). Nearby, a table was set up for artists to chat and work on sketches. As much concern as people did show about the rain before the event, I think people were unphased by the cooler weather.

At three, it was time for what has become tradition – the big group photo. Big groups of furs were moving all around the field area by around 2:45. (Sorry, Chance! I totally spaced on that and was telling people 3:30 for some reason. Thanks for the heads up) I had been talking with a first-time attendee who originally thought to stay out of the shot, but even I found myself doing some (light) herding of this fursuiter. Believe me, it doesnt matter how partial your fursuit is, or whether your head is perfect…. Chance wants you in the shot! He even herded me down the middle and I wished my new friends off as they piled into one of the middle rows. Thanks to our fur-tographers who were down for some fursuit wrangling and getting the right shot. Also, the tall ladder and the 2 accompanying drones were also helpful to help our ever-growing fursuit population squeeze in.

A short while after the crowd broke apart, it began to sprinkle.  This reminded me to get into gear about cleaning up the grounds. Sometimes, finding help is hard because people have scheduled things after the event.  With the rain being noticed by everyone, I knew there might be some who dont want to wait it out and might just leave. I took moments to connect with attendees as I went around and grabbed any errant soda cans. Trigger Happy Squirrel brought his large recycling bin (the large blue ones that many people have for recycling pickup at their house) back to the event, and so that allowed for a lot of our plastics and aluminum to be taken off of the grounds. We didnt have as many trash cans set up on the far end of the table due to the proximity of the “bee tree”, so with others’ help, we were able to keep things from piling up. Despite the weather and the lowering sun, Stego and I saw a visible improvement between the chaos of last year and this year, and we really appreciate that more people stuck by to help. (Blue Jaguar, Brum, Janala, and Kirin… you guys really stuck it out for us.  Also, some of the San Diego furs really stuck it out to the end, despite that long drive home)

Did you lose anything at FurBQ?   If you are still searching through your personal effects, please let us know if you think you might have lost something on the FurBQ grounds.  While everyone was doing trash detail, we did pick up a few things (clothing items, a belt, sports equipment, and yes… the quintessential single fursuit paw).

By morning, we still were feeling the long work of that amazing day.  Each year, we have a set of notes to take home, related to making sure we can improve on this fun event. With the population size, we have some big things to think about as we look to 2020.

With all the trolling from Mother Nature, and our normal worries about having enough/budgeting enough for the reservations and food…. The furry community comes together again and really makes this event what it was.   When it came to the (official) grilling, Stego and Leo really take on a whole day of standing at a hot grill. Kona Roo was here for fun, but he ended up jumping into the fray and made some delicious elotes.

We are a bit taken aback this year, as we also got a $600 donation in food and supplies from the Huntington Park Chapter of the Elks Lodge.  Our event brings alot of different groups of people together, with diverse backgrounds and hobbies. Elks Lodge #1415 is a little known part of FurBQ history, having attended our events in the last 5+ years.  This is a big deal to us and something that really knocked Stego over with a feather.

Also, we have to hand it to the people who were able to donate to our Ko-fi, for the 2019 event: Blue Hasia, WhiskeyWuf, Rivercoon, Ubervoop, Leo Tsubasa, Anna Songbird

The first bits of the Santa Ana winds are licking at our mountaintop, and that reminds us admins that it is Winter Time.   Last weekend, the holiday season kicked off with a celebration of lights. Furry event organizers from all over SoCal have more in store for you during the coldest months, and sometimes giving you the opportunity for celebrating the holidays. 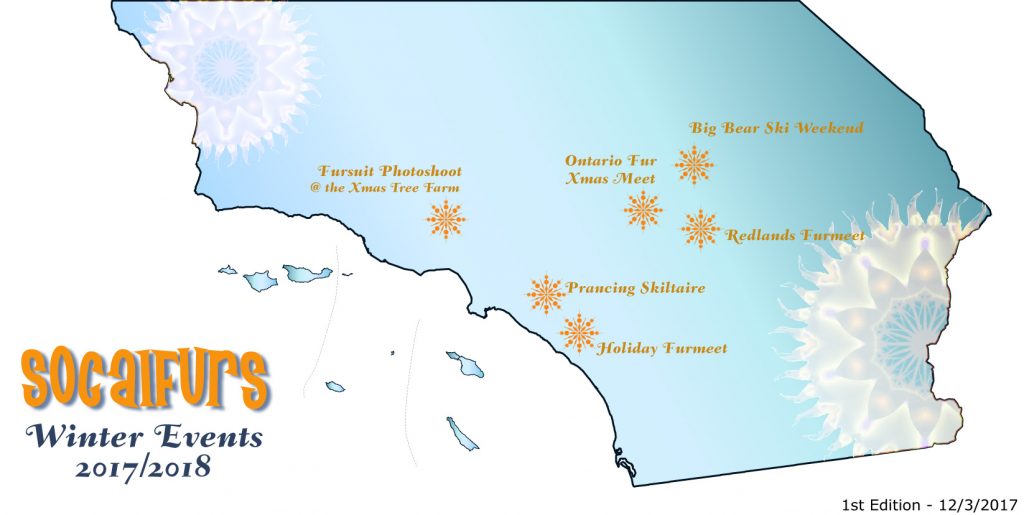 1st Edition. We will update this as more winter/holiday events are submitted.

END_OF_DOCUMENT_TOKEN_TO_BE_REPLACED

The signs of fall are here but I admit it kind of snuck up on me. Really, October waits for no one.  Among restoration of our event galleries, we also had a good helping of new events to add to our calendar.   Within that mix, there were more than just a couple events geared towards Halloween folly… 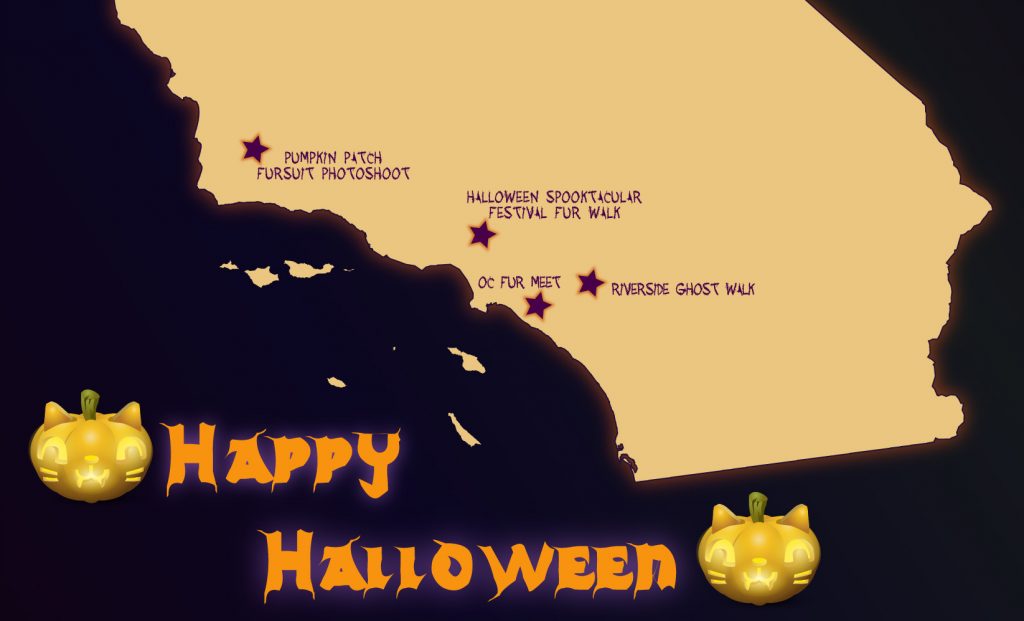 Known places to haunt and frolic…